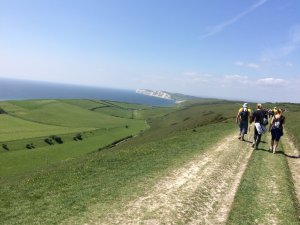 Brewers Decorator Centres have an outstanding team who not only provide outstanding customer service in their branches, but also immerse themselves in local community activities and fundraising.

In May 2016 Brewers Torquay Manager, Chris, took part in the 26.5 mile Walk the Wight sponsored walk.

Starting from Bembridge on the east of the Isle of Wight and finishing at Freshwater in the west, the walk is organised by the Earl Mountbatten Hospice on the island to raise vital funds.

Since the first Walk the Wight in 1991 over £3.5 million has been raised through sponsorship from walks which allow people of all ages and abilities to take part in the fun.

Along with the Earl Mountbatten Hospice, Chris also raised additional funds for the junior section of his local cricket team.

He raised a fantastic amount for both worthy recipients and Brewers topped up the amount Chris raised to help boost his achievement.

For more information on Walk the Wight visit www.walkthewight.com