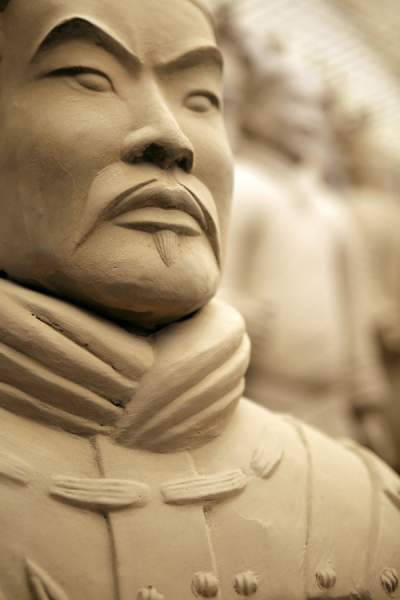 Brewers has a vast array of protective coatings to fortify substrates and force the elements into retreat.  With an outstanding pool of knowledge the Brewers team are highly skilled in specifying both interior and exterior projects to get the best finish and quality protection.
The spectacular Buscott House near Farringdon in Oxfordshire plays host to a garrison of replica terracotta warriors, whose biggest battle is fighting against the British weather. However the expertise and specialised knowledge from Brewers and Rust-Oleum has ensured the proud troop remain battle ready for many years to come.
The lifelike figures are based on the terracotta army discovered in Xi’an, Shaanxi Province, China, who were buried to protect China’s first emperor Qui Shi Huang in the afterlife.
In specifying the project Murfill became the ideal product choice due to its stunning qualities as a waterproofing system, its flexibility and ease of application. After initial preparation the Murfill system was applied to the soldiers, which will act as the perfect armour in weather protection and is available from your local Brewers branch.
To discover more on the collection of specialist protective coatings available from Brewers call in to your local branch or join the Brewers community on Facebook and Twitter.

The lifelike figures are based on the Terracotta Army discovered in Xi'an, Shaanxi Province, China, who were buried to protect China's first emperor Qui Shi in the afterlife.