On the trail with Little Greene

Trailing florals have been the subject of decorative pattern since long before the mechanisation of wallpaper production.

Trailing florals have been the subject of decorative pattern since long before the mechanisation of wallpaper production and the ensuing fashion for repeating pattern. Traditionally, the scenes depicted in early 18th Century interiors were painted by hand; in effect, bespoke murals.

The new ‘Archive Trails’ collection from Little Greene harnesses this and offers the following designs available from your local Brewers branch or online from Wallpaper Direct:

Vine offers an unmistakeable nod to the father of the late 19th Century Arts & Crafts movement, William Morris. A traditional surface print method has been employed to recreate the bold, original paper from 1932. The ‘Bleu’ colourway is very close to the original in colour, ensuring an authentic, yet contemporary version.

The oldest design in the Archive Trails collection, was discovered in the archives of The Whitworth Art Gallery in Manchester. This 1760 English piece was found intact at a house in Aix-En-Provence, France. The exotic scene accurately imitates a typical 18th Century hand-painted Chinese paper, but the tax stamp, still visible on the back of the original rag paper, identifies it as English in origin. The colours interpreted in the ‘Serein’ colourway are very true to the original – a surprisingly well preserved archive document.

This 1940’s design celebrates a truly rich mix of styles. The English Heritage-owned document from which this paper is drawn is actually a 20th Century piece, but the subject – exotic flora and the familiar oriental ho-ho birds - is classic ancient Chinoiserie, whilst the colouration in the original is very much in the style of a 19th Century French paper. This design retains the original’s oversized repeat and has been reproduced in six stunning colourways. 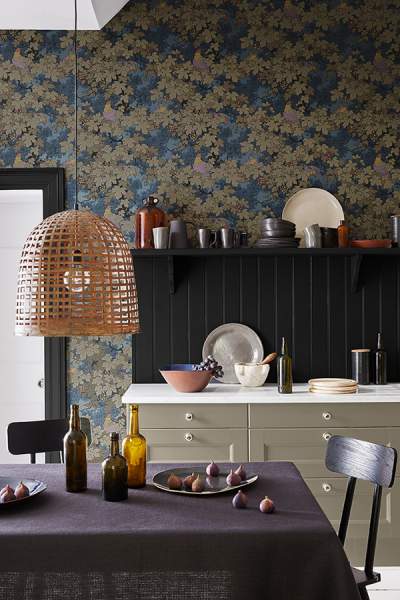