Refurb of the Woburn lions is a roaring success

Earlier this year a project to rejuvenate the lion statues at the entrance to Woburn Safari Park was completed.  If you ever visit the safari park, you will always see the visitors having pictures taken with the lions, they are a dominant feature and have quite a history.

These two lions, that were originally part of a group of six, are appropriately named the 'Lions of the Empire'. The majestic statues guard the entrance to the park and originally stood in front of H.M Government Pavilion at the British Empire Exhibition in London in 1924.

As an important feature of the park, their maintenance is key and Harry Stone, the local representative from Brewers Milton Keynes was asked to advise on the repair and painting of the lions over two years ago.  Each year they are painted, but due to the exposure and age of the Lions the paint system fails relatively quickly.

Enlisting the extra expertise of Akzo and then Rust-Oleum, Harry was able to provide a bespoke specification

Harry introduced Terry Carter to Bedford Estates and Paul Bowdler from Bowdler Contractors who carried out the work.

Terry specialises in render repair systems and following Harry's advice Terry removed the previous paint coatings, then repaired the cracks with a resin based filler.  The next stage involved applying a coat of sand and cement render with fibres. The bases to both lions were also repaired and rendered.

The pair were then painted using Rust-Oleum Primer 44 and Mathy's Murfill Waterproofing System all supplied by Brewers Decorator Centres to give them the best protection possible.

Photographed by hundreds of visitors that pass through the entrance to the park every year, the lions are now back to their best! 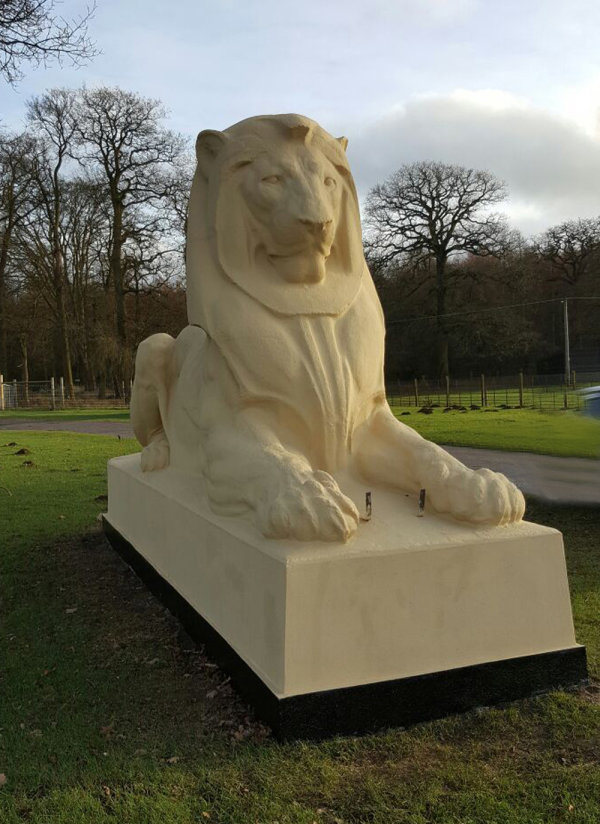 The regal lions are restored to their best