Turn up for the books

A charity-run bookshop in Newbury where senior citizens can come and socialise has been given a stunning DIY SOS-style facelift in just two days, thanks to a fantastic community effort including paint donated by the local Brewers branch in Newbury.

The bookshop, which is run by a centre for the elderly called Fair Close, had been open for a year in the local Kennet shopping centre but was in desperate need of repair with massive holes in the plasterboard and damaged walls.

With lots of support from various organisations, including Sales Advisor Gavin Weir from Brewers, the centre was given a blitz on Friday 8th November and transformed into a brilliant new venue with beautiful duck egg blue walls. Sandy Gilbert, Community Outreach Worker, said: “We now have the best shop in the centre!”

She added: “It was just the most amazing day. There were people coming in off the street offering to help, people dropping cakes in and meals on wheels helped out. We even had an old man come in with a guitar who ad-libbed an incredible song about us!” (see link below). 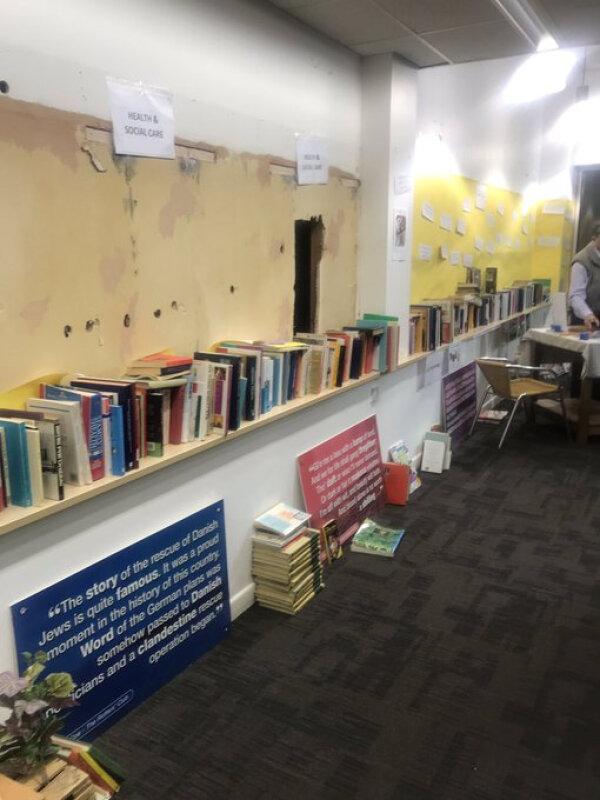 The bookshop, as well as offering older people a place to pick up a book and have a chat, is a great way for the centre to publicise what else they can provide for older people, such as a lunch every day. And now the bookshop looks so much better, more people are coming to volunteer which means they can open for longer.

The branch first got involved when a local painter and decorator, Mark Tidey, mentioned that the centre, which has been running for an amazing 52 years, needed some help.

Branch manager James Aiken said: “They were looking for help from carpenters and tradespeople that could help refit a community shop. They also wanted some paints to decorate the shop once complete. Being local to the store we thought it would be nice if we could help out by donating some of our mistinted paint as we always like it to go to a good home if possible.”

Sandy said: “The paint job turned out to be much bigger than we had anticipated but Mark and Brewers absolutely pulled it out of the bag for us and gave us so much more than we expected. Brewers have been absolutely phenomenal and I can’t thank them enough.”