Stories Behind The Art: The Wildlife Of Kennington Park

Anyone who has been to Kennington Park will have seen the vast varieties of wildlife that inhabit the area, in particular, the birds. The first half hexagon on the wall pays a delightful homage to the park’s flighted friends.

Each of the birds in the painting was designed by a different child as they played in the park’s adventure playground. From robins to pigeons, sparrows to blackbirds, the local children have done an excellent job of immortalising the park’s ornithological airborne associates.

As well as birds inundating the park with noise and energy, they are perhaps dwarfed in presence by the vast number of dogs that frequent the area. The children who designed their individual birds whilst in the playground were also visited by another animated creature, a four-legged friend called Charlie.

Charlie and his owner made such an impression on the children that they chose to make them both one of the standout features on their half hexagon!

The birds, the child zooming around on her scooter, and, of course, Charlie all summarise perfectly the energy and buzz of activity that makes the park so special and meaningful to the local community. 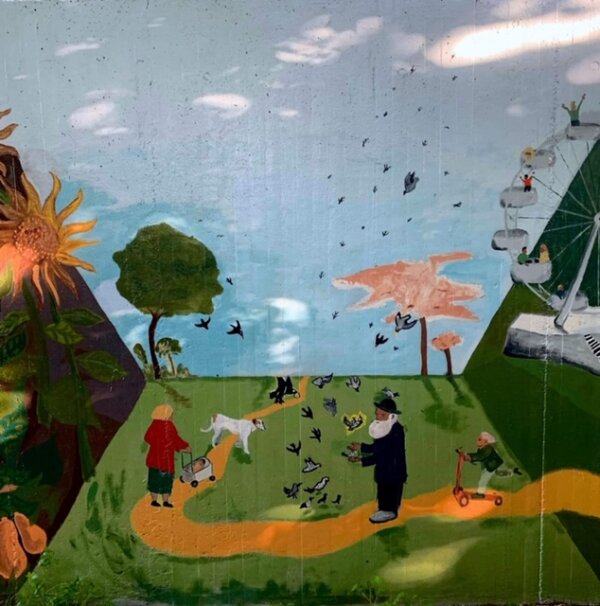