Inspired by Morris – An Insight into the World of Interior Design

Interior designer Naomi Scott-Dunne recently re-designed her apartment based in Putney, London. Built between 1904-1905, the Grade 2 listed Kenilworth building is made up of 150 apartments and has even been featured on the big and small screen! This is just one of the many facts Naomi uncovered when re-designing her new home, using research to fuel her creativity, “I am a very conceptual designer, so I always take in a building’s heritage, its provenance and stories surrounding the property.”

After researching several images as a starting point, she decided on the William Morris tapestry ‘The Woodpecker’ which depicts a tall fruit tree surrounded by swirling foliage, which Naomi felt captured the organic flow of the river and complemented the hues of the stained glass. She wanted all the rooms to have a harmonious feel, so every space in the apartment needed to be true to the original image. 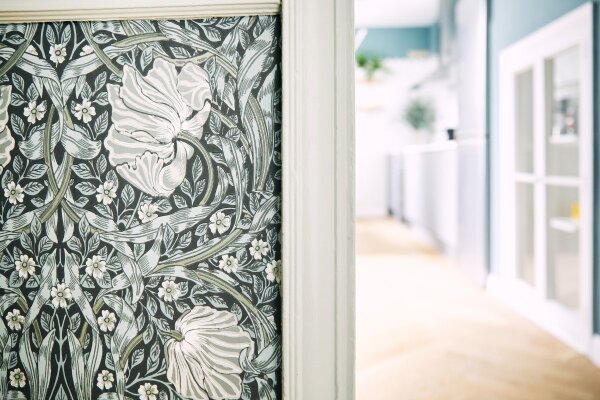 Naomi recognised this space as 'the pulse of the apartment' as all rooms run off it which is why the iconic Morris design was selected.

Morris & Co Wallpaper was selected for the hallway which is exclusive to Brewers and Wallpaper Direct. Naomi explains why she chose this design in particular, “the luxurious textural paper possesses the same ebb and flow of the River outside embodied in the intricate floral trellis and organic forms, whilst also possessing a strong symmetrical formation of the leaves, which Morris & Co incorporated into the design of his Pimpernel paper. Created in around 1876, the wallpaper exemplifies how Morris’ interest for Japanese design led to the simplification of lines and colours. Morris even used Pimpernel to decorate his own dining room at Kelmscott House in London. It was important for me that the hallway was the pulse of the apartment – it is both long and wide, with high ceilings and all rooms run off it.”

Naomi also used hand crafted ceiling roses, which are sympathetic to the buildings’ history and synonymous with her lighting choices, another key component of her design. Naomi also describes her colour selection, “Selecting paint colours was such fun: I wanted to extract from the Morris & Co Pimpernel wallpaper. For the Hallway above the dado rail and wallpaper, I opted for Farrow & Ball’s Light Blue 22, a delicious hue whereby its bluey-green characteristics changes throughout the day and looks divine when the two pools of light fall from the light pendants. Light Blue creates a peaceful and calming effect, and its silvery hints highlight the metallic touches in the Pimpernel.” 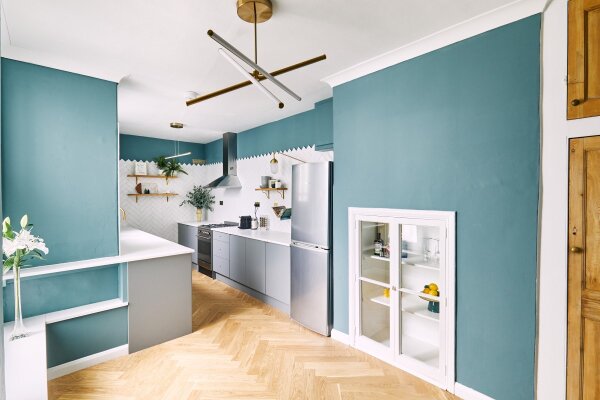 Mylands Burlington Arcade was used alongside the Herringbone theme carried from the flooring, to the tiling and organic sisal to encourage cohesiveness in the space.

“For the living room I opted for Farrow & Ball’s Elephant’s Breath – a modern classic which pairs beautifully with the crispness of the billowing white linen curtains/drapes and is a super neutral canvas to build upon and truly personalize a living space.”

“For each of the ceilings and space above the picture rails throughout the apartment, I selected the bright and airy Loft White by Little Green, which lifted every colour and gave the illusion of even higher ceilings than they are. With the exception of the dining room and kitchen, all woodwork was painted in the same hue as the walls, creating a flawless contemporary look, at the same time respecting the integrity of the space.” 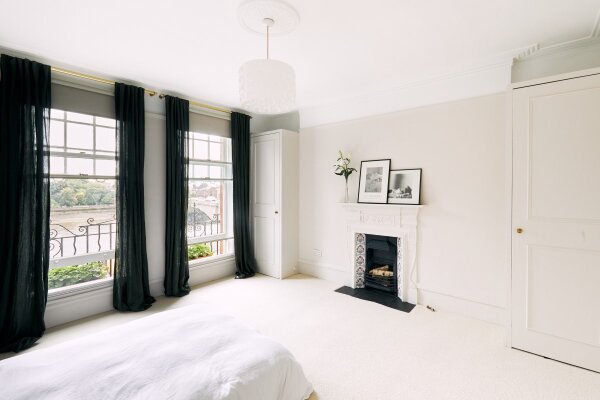 Blackout blinds were used as an essential to any bedroom, but dressed with linen curtains in a dirty moss hue.

“For the master bedroom – incidentally both bedrooms are the same square footage – I chose Farrow & Ball’s beautifully understated neutral Skimming Stone, which created a peaceful oasis. The second bedroom is flooded with light and the sizeable sash windows allow the breeze the blow in throughout the day. I selected Morris & Co Strawberry Thief Linen curtains to echo the wallpaper in the hall and they also precisely matched the walls, skirting and millwork in Little Greene’s French Grey.”

“For the dining room and area above the crowned tiles in the kitchen, Mylands Burlington Arcade was an easy choice for me, again extracted from the Morris & Co Pimpernel wallpaper in the hall, but also the shade of bluey-green teal was sophisticated, contemporary and fresh.” 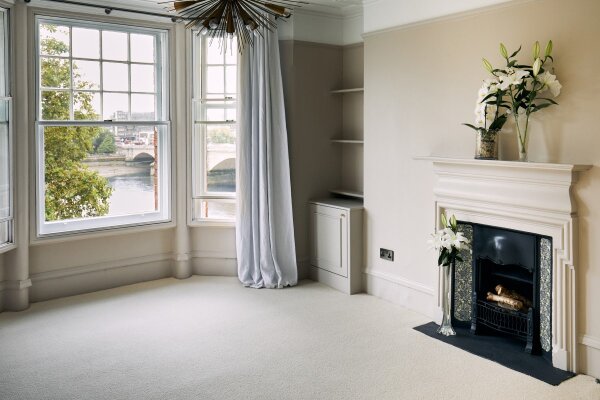 Morris & Co Strawberry Thief curtains were used to echo the wallpaper used in the hallway.

Naomi also said "The Putney Team are phenomenal - Tony, Lisa and team in assisting with all my paint and related queries. A super service was provided both in person and over the phone." 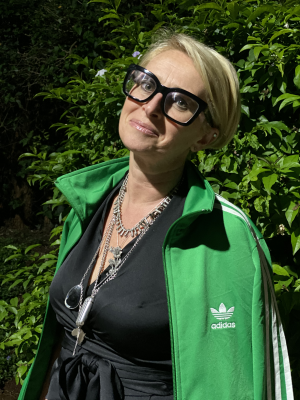 Naomi is not your average interior designer! She has lived around the world since 1994 working for the United Nations and decided to retrain, going back to Uni as a mature student.  For Naomi, designing is about bringing new dimensions and character into a space, we don't all dress the same, so why should our interiors be the same.  From a very young age Naomi could decorate her bedroom and there were some very questionable designs along the way, but she always found designing so empowering and every design is wildly different, since every client and brief is unique, so is the design. Naomi graduated from KLC School of Design in Chelsea Harbour 5 years' ago. Naomi was living in Ghana when doing her final assignment and wrote her dissertation whilst living in New York, this means that she’s accredited to ASID - The American Society of Interior Designers.
Naomi finds inspiration in so many places, often unexpected ones!  “Sometimes it can be the ageing patina on an old door, other times it can be from nature, but a huge proportion of my inspiration comes from travel - inspiration is literally everywhere.  Clothing is also very inspirational - I always give prospective clients a long questionnaire about themselves and I often ask them to open their wardrobe! I'll also create a shared Pinterest board so they can pin ideas - I then systematically delete EVERY single image in front of them - as copying someone else's design is just plagiarism, no better than copying someone else's essay, and each design should be about them, not about other's, they need to have the confidence to take ownership, designing with clients should be a collaborative process. I write a monthly article for Les Couleurs Le Corbusier - predominantly about colour philosophy but also much wider colour-related issues.” 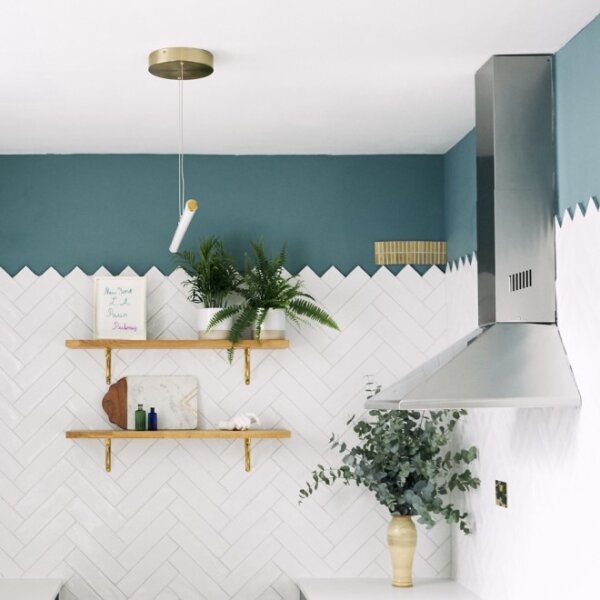 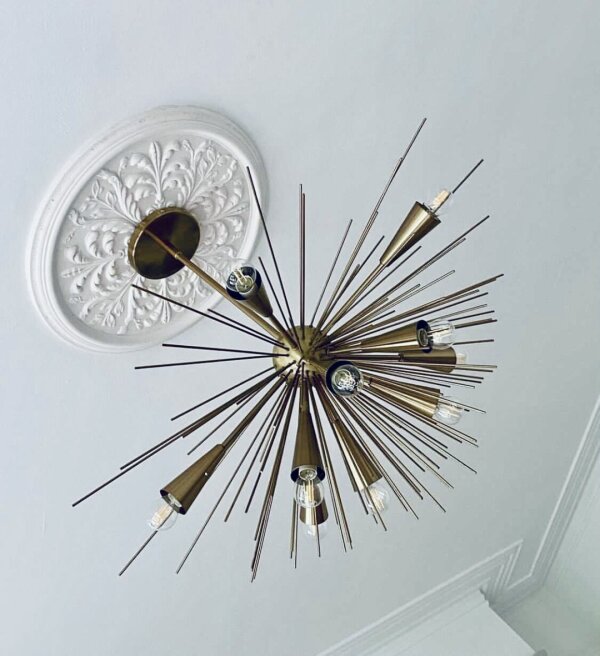 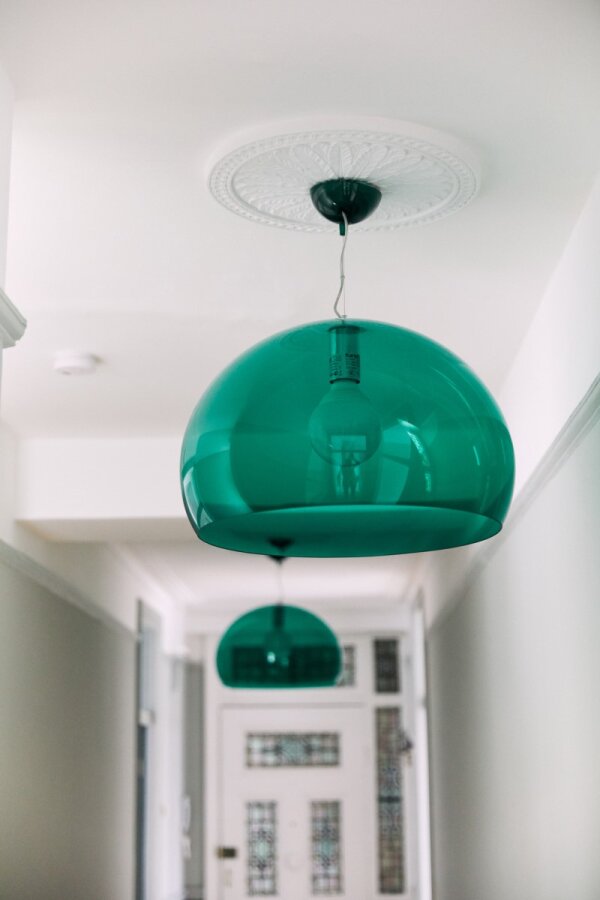 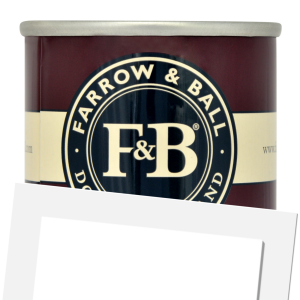 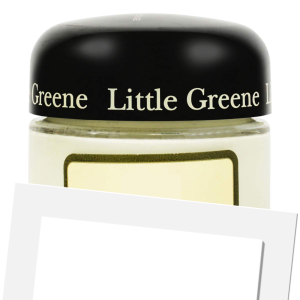 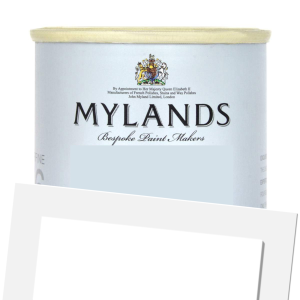