A road-safety campaign assisted by Brewers in Salisbury will be urging drivers to be especially careful this winter, in an effort to reduce the number of animal deaths on New Forest roads.

The campaign is a collaboration between New Forest commoners (the families that own the animals that graze the Forest) and other organisations.  It has seen near life-size ply silhouettes of ponies, cattle, donkeys, pigs and sheep, each displaying their numbers killed on roads last year, placed in towns and villages throughout the winter, as part of a wider campaign to slow drivers down.

Brewers in Salisbury were approached by a member of the campaign to see if they’d supply materials to paint the silhouettes.

Store manager, Tamsin O’Hara, said, "They had specific Pantone colours in mind, so we found the closest matches to these in Sadolin Superdec".

Matching the colour for the pig proved tricky; "There was nothing quite right in Superdec, so in the end we used Zinsser Allcoat, tinted pink". 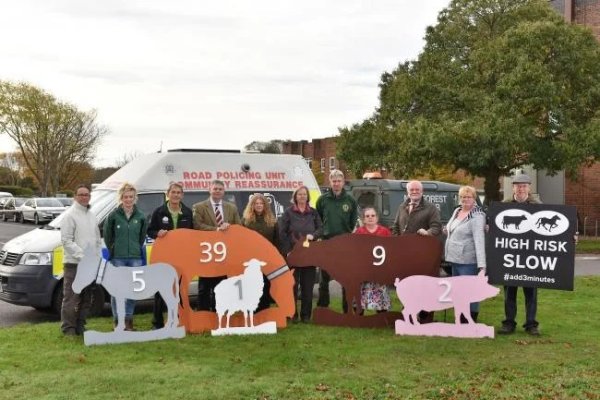 The number of deaths of animals on New Forest roads is highest in winter months, particularly in the two months after the clocks change, as evenings are darker and visibility poorer.

"Animals will often wander into the road," said Tamsin, "so I knew it was a problem this time of year, but I was shocked to learn quite how many animals had been killed".

Having herself witnessed a horse on the road shortly after it had been hit, Tamsin feels the silhouettes send an important message. "I’m pleased Salisbury store could get involved".

‘There was nothing quite right in Superdec, so in the end we used Zinsser Allcoat, tinted pink’