The competition to find the UK’s Crown Trade Apprentice Decorator of the Year is heating up as the 8 finalists have been revealed.

The talented competitors were judged the nation’s most promising industry apprentices after competing against hundreds of entrants in tough individual heats held at colleges across the country earlier this year.

Now, the 8 will go on to compete at the prestigious Skills Show, at Birmingham’s NEC from November 16-18, with a £1,000 first prize at stake.

The contest, in association with the Construction Industry Training Board (CITB), is the longest running showcase of talent for up-and-coming painters and decorators and this year celebrates its 38th anniversary.

Debbie Orr, Marketing Manager for Crown Trade, said: “As a business, we are committed to supporting the training and education of the next generation of painting and decorating professionals

“This is a competition which touches the lives of hundreds of people at the start of their careers, encourages them to strive for excellence in their craft and reach the highest standards.

“It’s a great opportunity for competitors to show just how well they’ve mastered the skills and techniques required by today’s professionals.”

As well as scooping the £1,000 top prize and title of Crown Trade Apprentice Decorator of the Year, the overall winner will also be considered for a place in Squad UK at the international Euro Skills 2018 championships in Budapest.

The Apprentice Decorator of the Year competition is a key part of Crown Trade’s ongoing programme to help address a skills gap which has emerged within the industry.

Figures released by the Construction Industry Training Broad revealed that more than 13,000 painters and decorators will be needed before 2018 to meet growing demand. 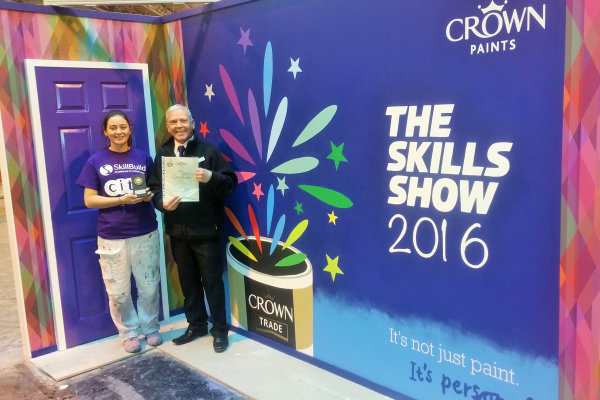 Debbie added: “We understand the importance of developing the next generation of industry professionals. It will be a major focus for the sector over the coming years and it’s something we’ve felt passionately about for decades.

“We’ve run the Crown Trade Apprentice Decorator of the Year competition for 38 years and it’s a commitment that sees us provide staffing, support and products for the regional heats and final.

“It’s a contest that puts the skills of people carving out a career in the industry under the spotlight and it’s hugely rewarding to see the effort and commitment they put in.”

‘This is a competition which touches the lives of hundreds of people at the start of their careers, encourages them to strive for excellence in their craft and reach the highest standards’