Stories Behind The Art: Funfair!

The first hexagon on the Brandon Estate mural was inspired by one of the drop-in sessions hosted by Jack and Tom and tells the story of Kennington Park from the perspective of the residents of the area.

Following the Yellow Brick Road retraces the history of Kennington Park as the famous funfair returns to bring joy to the local community.

Edward Walford’s work, Old and New London; Volume 6 (1878) reveals that the first fair came through in the 18th Century, when the park was known as Kennington Common, bringing joy and entertainment to the community. The park was littered with “booths, tents, caravans and scaffolds, surmounted by flags” as the Bartlemy Fair arrived.

The appearance of such a novel and fun experience in the park proved highly popular and to this day the park is frequented in the summer months by circuses and funfairs. Benson’s Funfair, who trace their heritage in the world of attractions back over 100 years, proudly follow in the footsteps of those who first arrived in the 18th Century and bring joy to the local residents.

This childish excitement, the movement, and the lively atmosphere of the funfair are encapsulated within the artwork of the first hexagon on the mural.

The Big Top in the background is dwarfed in size by the rides and attractions found in the park. The Yellow Brick Road traces the visitors through the funfair. Hold on to your hats as you circumnavigate the tea cup ride, prance with the gentle stallions of the merry-go-round, topple down the slippery slide of the helter-skelter, see the sights from high above on the big wheel, and try to win a cuddly bear by knocking down the coconuts on the stand!

Visit Instagram for more pictures and stories behind the art! 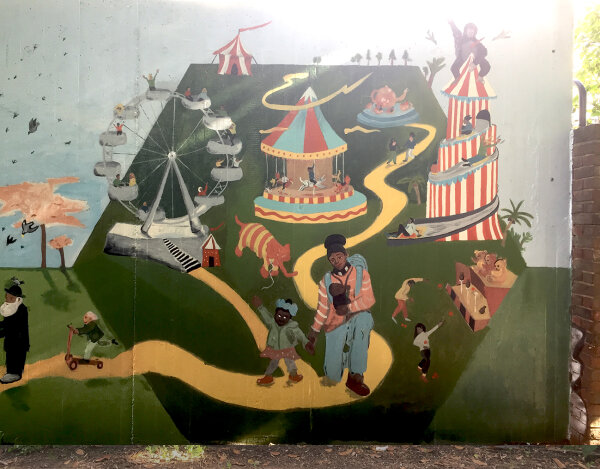