The fourth hexagon on the Brandon Estate mural was inspired by the famous Southwark market, East Street. Local residents sought to capture the history of the local area and make a statement piece of a local renowned landmark.

With a history that dates back to the 16th Century, East Street Market, known as ‘The Lane’ or ‘East Lane’ to locals, is located between Walworth Road and Old Kent Road. It first makes an appearance as a field where farmers from Surrey and Kent would rest their livestock before the final march into town. Despite the marketplace being active since the Industrial Revolution between the 1820’s - 1840’s, it was officially recognised as a market in 1880.

The field was little more than a boggy swamp when the farmers used to stop there back in the 16th Century but still welcomed a large volume of traffic as locals would buy produce from the farmers before they moved on into the city.

With such vast popularity, the swamp was drained, and surer footing meant that the first stalls could be erected. Before long, the land, which was bought or leased from the church, was developed over and a proper marketplace was established. By 1780, a bill of sale for the land led to the official creation of East Street as a public highway and market road.

A modern-day frequenter would struggle to recognise the old market as things were vastly different before. At 8am a policeman would blow a whistle and throw open the gates of the market to the vendors, who would then rush in to set up stalls in the best locations. It was particularly important for those with shops to ensure they were able to erect their stands in front of their own shop-fronts.

With the creation of the licensing system in 1927, this became less of an issue but soon after, the market was nearly closed due to lack of trade during WWII. Thankfully, it was able to return to glory as soldiers and locals returned after the war and found new inspiration with the arrival of new and exotic stalls. Caribbean and Eastern cuisines populated the stands and the market was once again booming, as it still does to this day.

The keen eye may recognise the famed gates of the market from the opening credits to Only Fools and Horses, and the market is also the birth place of Charlie Chaplin.

This sprawling buzz of activity and contemporary multicultural society is what the team have attempted to encapsulate in the mural. The hexagon summarises the hustle and bustle of the colourful and diverse market.

Visit our Instagram page for more stories behind the art! 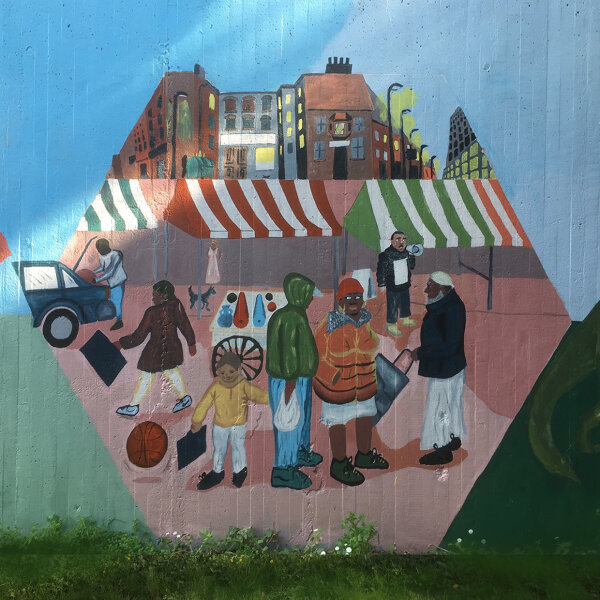