Celebrating Street Art Along the Coast

Hastings and Bexhill stores have been making an impact on the Urban Art scene this month, supporting an Art Festival which has stretched along the Southeast coast.

Now in its 20th year, the Coastal Currents Arts Festival celebrates art and culture along a 40-mile stretch of coast, from Seaford to Rye. Throughout the month of September, they light up East Sussex with hundreds of artistic partnerships, from accessible public art to community performances. As part of the programme, Festival Director Tina Morris wanted to install public murals, and contacted Brewers to see if we could help with two sites: in Bexhill, one gable-end wall in Wickham Avenue; and in Hastings, the side of the Observer Building on Cambridge Road.

‘We were aware that Bexhill didn't really have any significant murals,’ said Tina. ‘Serendipity struck when we were approached by the owner of 29 Wickham Avenue, who wanted to paint her wall. And the Observer wall was a real coup to get! We chose this building as it is in one of the more deprived wards in Hastings and we wanted to continue to make a difference to that community. We decided to make a strong impact at ground level.’

And both sites are certainly an impact!

A Sussex butterfly with a Grey Owl now adorns the wall in Bexhill, and in Hastings, the Green-eyed Flower Bee buzzes alongside passersby. The murals reflect the festival’s environmental focus this year, and their desire to highlight species from the Sussex area. ‘I think these sorts of public canvases should be trying to spread a positive message about the creative community, and educate and encourage people to look after their environment,’ said Tina.

The artwork has been creating such a positive stir that BBC news have visited the sites on two occasions.

‘The response has been fantastic.’ said Tina, ‘The passersby interviewed on BBC news and those that spoke to us during the install were so encouraging and nice to the artist. And there was even a street festival for the Bexhill Butterfly!’

The artwork has also had the seal of approval from Brewers staff...

‘They are beautiful and always bring a smile,’ said Amanda Verrall of Hastings, ‘they really brighten up some of the old buildings!

The festival ran entirely independently this year after sadly losing its funding from the Arts Council England and seed funding from Hastings Borough Council; however sponsors like Brewers have made it possible for the programme to continue.

‘It is great to give something back to the local community in which we work. The murals are excellent – very bright and vibrant. It is incredible what artists can achieve from a few tins of paint!’

It’s clear from the public response that Coastal Currents is deeply important to the local community. ‘It allows artists to not only express themselves under a public-facing banner, but also creates community and promotes well-being, cultural partnerships and beautification,’ said Tina. ‘We are doing brave things with street art and inventing new ways to bring free accessible art to the street. We love that companies such as Brewers are on board with being part of this community, helping enable ideas, dreams and artist’s visions.’

To find out more about Coastal Currents visit www.coastalcurrents.org.uk

To see more of the murals and find out more about the artists responsible for the work, visit instagram
#bexhillbutterfly – @ceepil on instagram
#ohbee – @atmstreetart on instagram 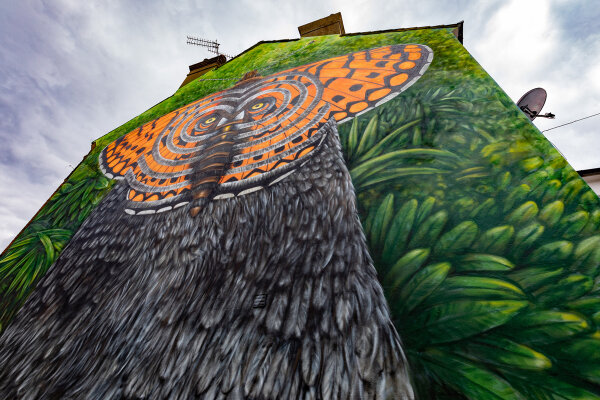 ‘‘I asked the artists to choose RAL colours, but one was unusual, Lloyd (at Brewers) helped with colour matching from a Pantone reference.’