Stories Behind The Art: Our Wooley Friend

This article brings you yet another story behind the art of the stunning mural created on the Brandon Estate in London. Brewers in Peckham are proud to have been able to support this project by supplying over 150 litres of Albany paint to brighten up the 60m wall.

Made up of multiple hexagons each depicting a different topic inspired by local community groups and residents, this article focuses on the hexagon about the famous finding of the Woolly Mammoth tooth!

Discovered during the development and construction of the Brandon Estate in in the 1960’s the tooth was an exciting find. In honour of the long lost giants, the children of the area have come together to design this mural which shows them embracing their woolly friend by giving him a well earned wash! 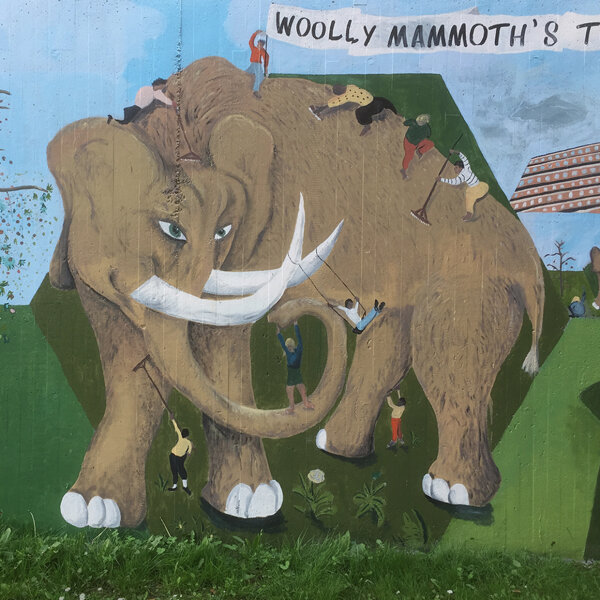 A theme that is common throughout many of the designs found on the wall, and that was made prominent in many of the sessions, is the concept of togetherness. The children who designed this wanted to ensure that their message was conveyed and this is even more apparent when they were told about the history of the mammoth.

Despite having lived many thousand of years ago, these giants are one of the best understood prehistoric animals known to science as their remains are often not fossilised but frozen and preserved. The woolly mammoth coexisted with early humans, who used its bones and tusks for making art, tools, and even homes, as well as providing much needed sustenance for the tribes.

The children were keen to show that they would never have thought about such an activity and wanted, instead, to show how much love and affection they would give to these gargantuan Goliath's. Much rather than hunting them, they would want to make sure they were clean and well looked after!

The message is a moving one from the kids. The rate at which humanity has caused the extinction of plants and animals resonates with these children and they are keen to make sure that they make their love and compassion for their animal friends known!

Take a look at more of the art #WalkTheWallSE17