Stories Behind The Art: WWII Bombers and Poppies

This is another section of the Brandon Estate mural, created by Bee Urban, that was inspired by the lives and memories of the local bingo group. After celebrating their tenacious and proud history in the neighbouring hexagon, they wanted to also remember those who lost their lives during the war.

The group created a sombre and moving section that acts as a memorial to all of those who gave their lives and were affected so harshly by the war. The residents sought to make sure that the history of the area included the harrowing effects the war had on the country and London, including residents of Kennington.

The park, so filled with life and blooming with activity before the war, was the unfortunate scene of death and destruction during the Blitz. The large bunker and trench network of Kennington Park that brought refuge to the residents of the area was a symbol of determination and resilience as Londoners sheltered from the airborne barrage as best they could for 57 consecutive nights.

However, it was also the sight of the worst loss of life in Lambeth during the war – something that the community will never forget and have chosen to remember on the wall. On 15th October 1940 at 20:05, the trench shelter suffered a direct hit by a 50lb bomb. Rescue workers spent hours attempting to dig out the dead and wounded, battling continued onslaught from above and near total darkness.

The scene is a stark reminder of the 104 lives lost that day, and a fitting tribute to the history of the area. The poppies that populate the foreground of the painting are a homage to the lives lost on the war front in Europe, as local residents as young as 18 fought for their country in battles that raged all across the world.

A local girl plays hop-scotch in the park as a dark silhouette of an enemy bomber looms overhead. 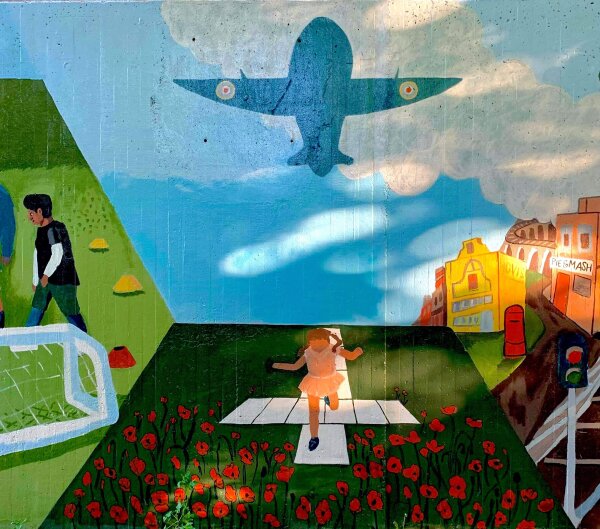 ‘This section (of the mural) reminds us all of the terrible effects brought on civilians and ensures we will never forget.’