Stories Behind The Art: The Tree At Kennington Park

The section of the Brandon Estate mural that we take at look at in this article has a more harrowing tone.

Many of the children commented during their design stages that they were shocked and worried by the air pollution in London caused by years of rapid industrialisation and the ever-growing number of cars that fill the city.

The mural they designed therefore depicts the damage being done by this pollution to nature and also the steps they believe can be taken to try and counteract the issues.

The tree depicted is a young London Plane (Platanus x Hispanica) that is found next to the wall at the Brandon Estate. These trees are often planted in parks around London because of their adaptability in urban conditions and their resistance to pollution. The origin of the tree is not quite known but is thought to be a hybrid of the Oriental plane and American plane, being brought to the United Kingdom in the 17th Century. Despite being a relative newcomer to the wildlife of the UK, London’s grey squirrel’s love to call these places home.

These trees, and so many others, are subject to decline thanks to urbanisation. And yet, this enduring tree continues to produce beautiful leaves from top to bottom. It is trees like these that give life and hope to the parks of London, in particular the grounds of Kennington Park.

Take a look at the beautiful community mural #WalkTheWallSE17 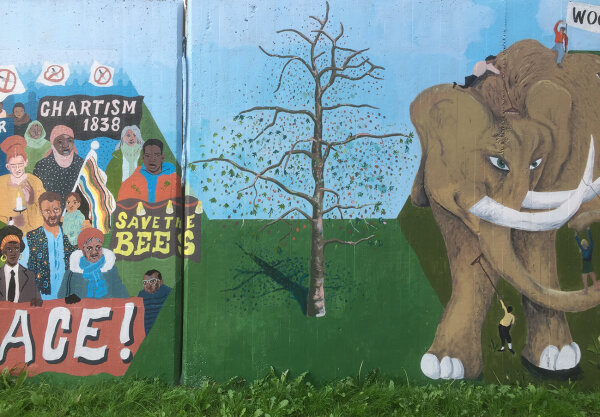 A stark message about the effects of air pollution on the parks of London, depicting the damage it can do to our parks and wildlife.