Stories Behind The Art: 1950's Allotments

An enormous part of London’s history has been shaped by events in the past, unfortunately, war has often been at the heart of this change.

The second hexagon on the wall was designed to pay respects to those affected by World War II back home on the Homefront. Whilst war tore mainland Europe apart, the Blitz brought fire and dismay to the residents of Britain. However, local bingo enthusiasts and residents of the area do not view these times as so destructive. When asked to recount their memories of their experiences, they wanted to dedicate a section of the wall to what London looked like before the Brandon Estate was constructed.

In an effort to keep Britain from starvation as Germany cut off her supply routes, the country was overwhelmed by the efforts of people to ‘Dig for Victory.’ During WWII, Kennington Park was covered in allotments where local residents grew and nurtured their own vegetables. The park was also home to a large trench network and bunker for locals to find shelter in the event of an air raid. This move to Dig for Victory as well as the bravery and tenacity of the locals is captured in this hexagon as they celebrate their history.

The history of the Park can also be found with the old train line that used to run through the area, winding its way through the throng of Victorian era tenement houses that homed the factory workers of Kennington. The sense of community is encapsulated by the shop fronts depicted that sell fresh bread and piping hot servings of pie and mash to the local work force.

It is truly a wonderful rendition to the history of Kennington Park and has been brought to life by the proud memories of local residents. 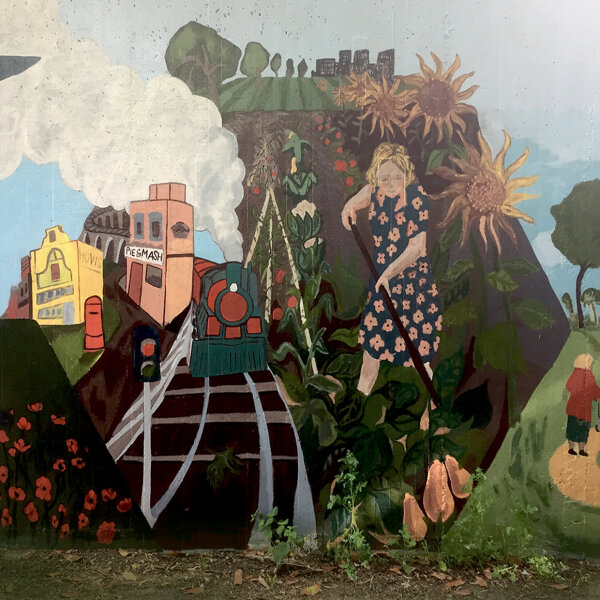