Introducing, Karla Schon, whose work we’ll be looking at in this #ProudDecorator edition!

Karla is the owner of Chelmsford based vintage furniture re-purposing company Vanity Flair. Clients commission Karla to create a piece of bespoke bathroom furniture. Karla begins each project by sourcing the perfect piece of furniture, however finding a piece with the right dimensions and vanity unit potential isn’t always easy.

“Finding a furniture piece with the right dimensions can take a lot of time – you need the right height so it’s practical enough to use with the basins as well as room for plumbing and plenty of storage. Each client is looking for something unique and they often already have a style in mind – be it Edwardian, French or Retro”

But how on earth did Karla begin transforming furniture into bathroom vanity units? Karla has a degree in Design for TV and worked as a freelance Art Director for several years before finding a career in the marketing world in an attempt to find a more secure job. After being made redundant for the second time in 6 years and losing a close friend, Karla decided that enough was enough and it was time to put her creative talent to good use and start her own business.

Whilst exploring possible business ventures, Karla was looking to redesign her bathroom. A major bug bear of hers was the lack of counter space in a traditional pedestal basins offer and the balancing act required when applying make-up in the bathroom each morning. The UK had at this point started to embrace the bathroom vanity unit but none of them tickled Karla’s fancy.

With quite an eclectic taste Karla decided that she would create vanity units which reflected her taste and allowed the bathroom to become an inspiring room – similar to the feature wall or grand fireplace found in many UK living rooms.

The first project Karla began with was simply named ‘Black & Gold’. The double vanity unit came in pretty poor shape; the hinges were way past their best and the drawers didn’t quite work as they should. The unit was sanded and wood filler was used to repair some of the worst dents/scrapes. New hinges were installed and the drawers were fixed. Zinsser Shellac-based primer sealer was applied, followed by two coats of Farrow & Ball Mid Tone Wood Floor Undercoat plus a few top coats of Farrow & Ball Pitch Black Modern Eggshell. A final coat of Danish Oil was used to bring the interior of the unit back to life. The unit was completed with two beautiful hand painted basins imported from South America, along with two gold PVD mixer taps and heritage brass stepped door knobs.

Karla visits her local Brewers Decorator Centre in Chelmsford for most of her supplies including wood fillers, sanding paper, dust sheets, undercoat (and the list goes on!) You’ll often find Karla in the sample pot area of the store looking for colours to match her many and varied colourful imported basins. Karla has a particular soft spot for Little Greene colours which match her more vibrant basins.

“The beauty of what I do is that no piece is ever the same, so I find that whichever project I’m currently working on soon becomes ‘my favourite!’’

But we had to get Karla to choose one project as her favourite! She selected ‘The Spanish Beauty’, an ornate Spanish carved solid wood sideboard measuring a whopping 2.5m in width and weighing 100kg. This was Karla’s most challenging project which saw the sideboard transformed into a double vanity unit. The unit was too high in its original state so the feet were sympathetically shortened to work comfortably as a bathroom vanity. The intricate carvings required a great deal of work to strip of the original varnish. Once in a fit state, Karla had to wait 6 weeks for the beautiful solid aluminium gold tiles to be delivered all the way from Spain.

“Brewers Chelmsford, especially Karen, have been so helpful and supportive to me. They’ve shown a genuine interest in helping me select various tools and materials as well as offering moral support in my early days, so a huge thanks to them all.” 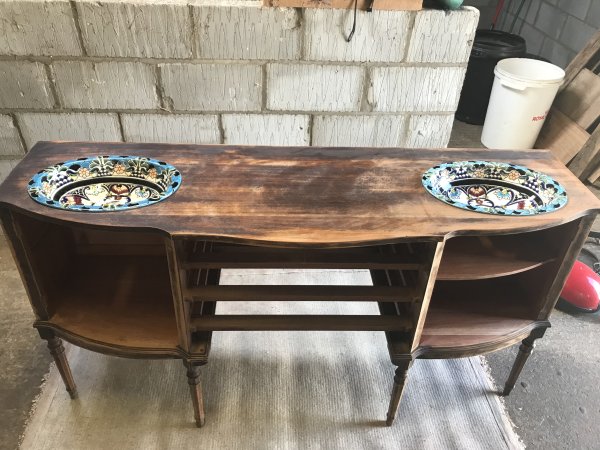 A mixture of before photos from Karla's re-purposing porjects

To see more of Karla’s work, visit her website www.vanityflair.co.uk 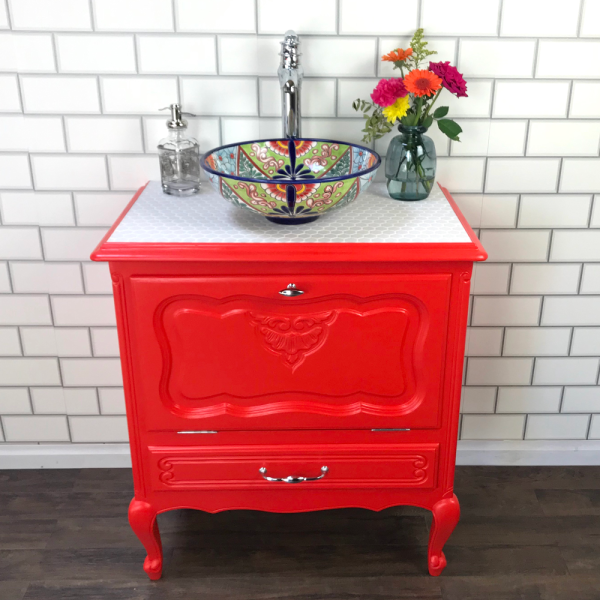 Would you like to be featured in our next #ProudDecorator article? Get in touch today with your interesting projects.