Horsham area was thrilled to co-host a charity fundraiser this September with film and TV star Warwick Davis.

A charity golf day, held at Mannings Heath Golf Club in Horsham, West Sussex, saw 80 players come together to raise money for Little People UK, an organisation that supports people with dwarfism and their families. The charity was set up in 2012 by Warwick and his wife Sammy, who both have forms of dwarfism, and who wanted to reach out to help families contacting them for advice.

‘We discovered Little People UK soon after, and the support they give families like us is incredible. They rely on donations to operate, so when Brewers agreed to sponsor our fundraiser, I was delighted.’

One such family were two members of the Brewers team at Horsham store – Jon Hill, Regional Manager, and Jayne Ansell, Showroom Advisor, who are father and daughter. Shortly after Jayne’s son, Henry, was born he was diagnosed with achondroplasia, the most common form of dwarfism. "We knew nothing about the condition and had a million questions," said Jayne. "We discovered Little People UK soon after, and the support they give families like us is incredible. They rely on donations to operate, so when Brewers agreed to sponsor our fundraiser, I was delighted."

Warwick and fellow actor Ray Griffiths opened the event, which brought together Brewers staff, customers and suppliers alike, by thanking them for their support. After a spot of putting, Warwick met teams around the course. And after a day’s golfing in glorious weather, the players were invited to a gala dinner, where Warwick spoke and answered questions about Little People UK, his dwarfism, and, of course, his film and TV career.

After some friendly rivalry amongst players, the overall team winners of the day were announced as Grain Carpentry, captained by Steve Eyres, a Brewers Brighton customer.

With a raffle and prize auction, the amount raised was an incredible £7,000 – a figure that far exceeded expectation.

"Everyone was in such high spirits," said Jayne. "It was a really positive day and everyone was incredibly generous. Warwick and Sammy were delighted with the amount we managed to raise for Little People UK and said they couldn’t thank everyone enough for the day."

"Mixing social, business and fundraising is a great passion of mine," said Regional Manager Jon Hill. "Brewers have very kindly supported a number of charities in the area and I cannot thank them enough in sponsoring this event for Little People UK." 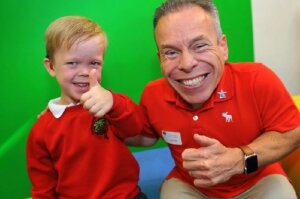 Before attending the Brewers charity golf day, Warwick visited Northlands Wood Primary Academy to see pupils, including Jayne's son Henry, in a special assembly. He talked to the pupils about how he got into acting, and his experience growing up with dwarfism.

Speaking afterwards to the Mid Sussex Times, he said: "Henry's parents run a lot of quiz nights and charity fundraisers, which is wonderful because a charity survives on donations.

"It's really important to raise awareness for the charity and dwarfism, so it's really good to have supportive members like Henry's parents."

To find out more about Little People UK, visit www.littlepeopleuk.org 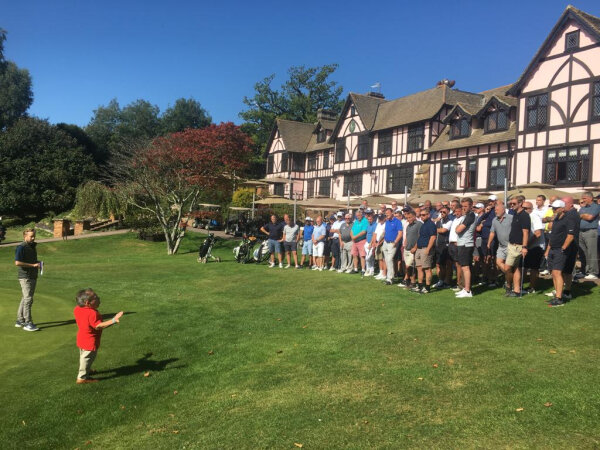 Blessed with glorious weather, the fundraising event was a great success