Stories Behind The Art: Demonstrations 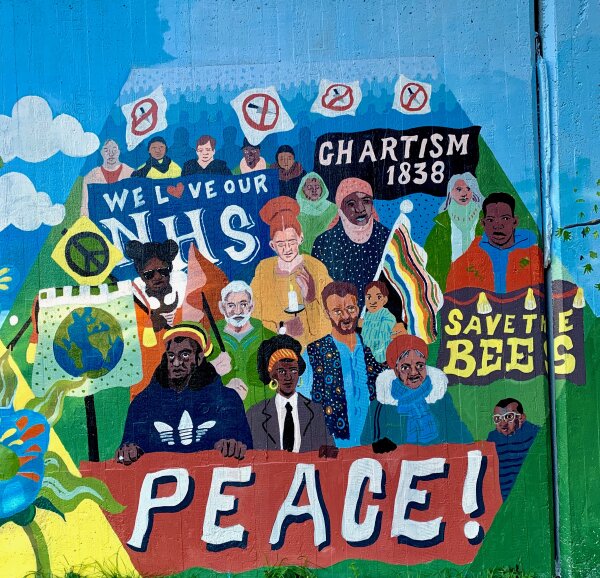 Brewers store manager Jimmy Thomson was delighted to help by donating over 150 litres of Albany Paint to the community project. The Peckham store were blown away by the enthusiasm of Bee Urban’s Barnaby Shaw as his team strove to overcome the negative image created about the estate, seeking instead to highlight a very different message.

The 7th Hexagon on the wall details the long and rich history of Kennington Park has as the being the focal point of large-scale demonstrations and marches.

Kennington Park was the site of the first Chartist march of 1838. The Chartism movement was a working-class movement for political reform in Britain from its birth in 1838 to 1857. Taking its name from the People’s Charter of 1838, it was the first national protest movement, and had strong political footholds around the country and in particular in London. Gaining particular popularity in 1839, 1842, and 1848, petitions were signed by millions of working people and presented to the House of Commons to put pressure on politicians to concede manhood suffrage. A key factor in the establishment of this movement was the use of mass meetings and demonstrations, and Kennington Park played host to such events.

In more modern times, the Park has also been used as host to LGBTQ+ and anti-austerity movements.

A focal point and important issue that was raised at many of the drop-in sessions was concern by local residents about the history of Kennington Park and knife crime. The participants wanted to show a united front against the threats of crime on young people in the area and demonstrate how there is hope for the past to be forgotten and a new time of peace and prosperity to arise.

The participants wanted to create their own modern and updated protest, a stand with several different issues being championed.